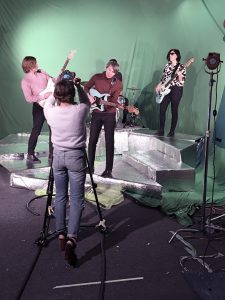 I’m happy to announce that my next album, ‘Blue Motel’ (coming April 27 on Lovemonk/Legere) will be released under the new band name Bart & The Bedazzled! Its been a long time coming. Jessica Espeleta, Andres Renteria and Wayne Faler have been an integral bart of the music, even going back to the last album, ‘Physical World’. We’ll be playing record release shows in San Francisco, Los Angeles and other west coast cities in April. So look out for that! There’s also a music video in the works directed by our dear pal Cassandra Lee Hamilton! On the left there’s a photo from the shoot. Note: the green screen! Gonna be some special affects behind us!